50 Years of Flying for Heritage

On Wednesday 8 February 2017 Historic England celebrated 50 years of our flying programme. Since those early days in 1967 much has changed, but reconnaissance, the act of flying to record and monitor sites and landscapes of archaeological interest, is still at the heart of the work carried out by our research teams.

This article was originally written in 2017 to mark the 50th anniversary but we have kept it live as it continues to be read and enjoyed.

On a cold February afternoon in 1967 an Auster, four-seater, light aircraft took off from Fairoaks airfield on the outskirts of south west London. This was the first test flight of the Royal Commission on the Historical Monuments of England (RCHME), one of the predecessors of Historic England. On-board was the pilot, a photographer, Ron Parsons and John Hampton. John was responsible for setting up the RCHME Air Photo Library in 1965 to implement the commission’s resolution (1964) to “use air photography to build up rapidly a record of field monuments throughout England.”

In the beginning this involved acquiring aerial photographs to build up a library of images of archaeological sites. By 1967 it was felt that RCHME should take its own oblique aerial photographs in support of its field survey work. Oblique photographs are taken at an “oblique” angle to the ground, as opposed to directly from above. They are usually taken with a hand held camera through the open window of a plane. The main target at this time was cropmarks; the walls and ditches of buried archaeology can affect the rate at which plants grow over them, causing differences in colour and height. These cropmarks are not always visible on the ground, so the best way to look for them is from the air.

This first flight was very much an experiment. Flying from Fairoaks to Basingstoke, Tidbury Ring and back they photographed prehistoric sites on the chalk soils of Hampshire. Many of the sites had been ploughed recently and were seen as colour differences in the soil and germinating crops. During the 1.5 hour flight John Hampton learned a number of valuable lessons, such as the best height to fly, the best angle to use and to make sure there was plenty of film! The lessons learned from this and subsequent flights formed the foundation of 50 years of flying by the aerial reconnaissance team in RCHME, English Heritage and now Historic England.

Growth of the archive

At about the same time as this first flight the collection of aerial photographs grew with the arrival of the Crawford Collection from the Ordnance Survey. Later, in the 1970s, the Air Photo library acquired many more aerial photographs from archaeologists and private fliers keen to discover archaeological sites. One such flier was Derrick Riley who took this photograph of an Iron Age/Roman field system in Nottinghamshire.

See how the aerial collection has grown over time

The oblique photographs acquired and taken by RCHME were ordered by kilometre square and stored in distinctive red boxes. Then in the 1980s there was a rapid growth with the acquisition of the Department of the Environment collection of vertical aerial photos. This collection included all prints taken of England by the RAF since the start of WWII such as the image below. This shows the airfield at Biggin Hill, near London with evidence of the many bomb craters sustained during German air raids. Further expansion came in the 1990s with the acquisition of the Ordnance Survey archive and in 2007 with the Aerofilms collection.

In the 1970s John Hampton and his team looked at various ways of interpreting and mapping from the aerial photographs taken by RCHME and acquired from local fliers. Along with others, they experimented with a variety of mapping techniques from sketch plotting to photogrammetry. An important step in the development of this process was the project to map the archaeology around the Iron Age hillfort of Danebury. This approach was scaled up by RCHME to map the prehistoric archaeology visible as cropmarks on the Yorkshire Wolds. This project used computer aided rectification of oblique aerial photographs, a process that was being developed.

In the late 1980s, as the archive acquired more aerial photographs, RCHME developed a systematic methodology to interpret, map and record all archaeological features, not just cropmarks, visible on aerial photographs. Pilot projects in Kent, Hertfordshire and the Thames Valley were set up to develop the methodology further.

In the 1990s the range of subjects photographed increased as RCHME used aerial photographs to record the large building complexes they were surveying that were undergoing major changes at the time. These included textile mills, hospitals, prisons and Cold War military sites. For some of these sites such as the textile mill below in Leeds, these photographs are the last record we have as development pressures have since led to their demolition.

The 1990s also saw new discoveries across the country especially in the hot summers of 1995 and 1996. Below is just one such site, a “banjo” enclosure, so called because of the shape; a circular enclosure with a long funnel neck leading into it. See other examples of new sites discovered in the 1990s and at other times in the gallery below.

In the 1990s the political changes and opening up of eastern Europe led to archaeologists visiting the survey and archive teams to learn from our experience of flying, mapping and archiving aerial photographs. This led to us joining forces with other aerial archaeologists from western Europe to set up training courses in Hungary and Poland. This in turn led to further work exchanges and training courses across Europe.

The late 1990s saw RCHME and EH working together to supply aerial photographs to help Field Monument Wardens monitor the condition of scheduled monuments. Following the merger of the two organisations in 1999 this became an important aspect of the flying programme. In the image below the World War Two anti-aircraft battery might appear to be safe since it has been removed from the cultivation that surrounds it. However, it is still at risk from being overgrown by scrub.

The new century saw important technological developments taken up by the flying and mapping teams.  The reconnaissance teams began experimenting with digital cameras in 2003 and the archive developed standards for the long term preservation of digital data. The last negative film shot in the air was 2006. The archive now holds over 200,000 digital aerial photographs taken by the reconnaissance teams.

In 2001 English Heritage used lidar, a system of airborne laser scanning, for a review of mapping of the Stonehenge World Heritage site. Since then HE have developed our use of the data and now use it as a regular source for any mapping and interpretation projects.

The early 2010s saw more new discoveries, of which these are our favourite examples.

The discovery of new archaeological sites is still the most exciting part of the flying programme, but since the first flight in 1967 the scale, range and scope has changed. New sensors and camera technology are allowing us to look at new ways of taking aerial photographs. New software and access to other aerial data such as lidar allows us to see, map and understand the historic landscape in ways that could only have been dreamed about in 1967.

Since our systematic analysis of new and archive aerial photographs began in the late 1990s we have discovered over 122,000 new archaeological sites like the one above.

A selection of some of the other images captured over the past 50 years. Please click on the gallery images to enlarge. 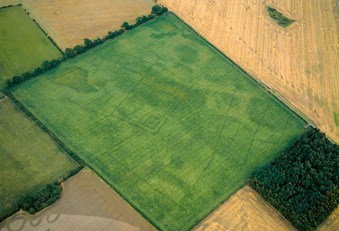 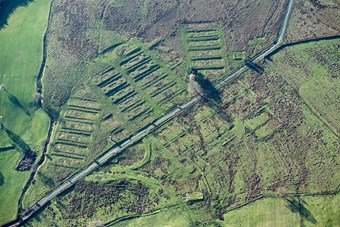 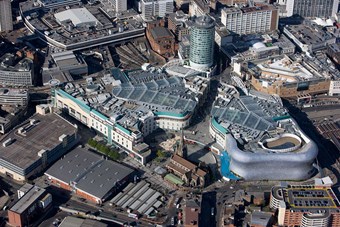 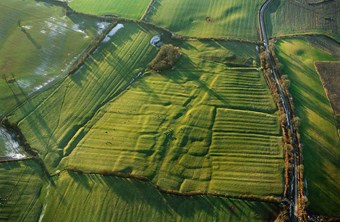 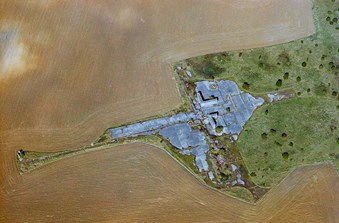 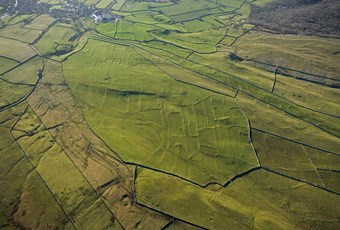 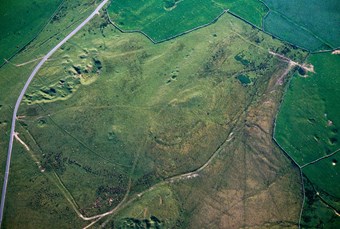 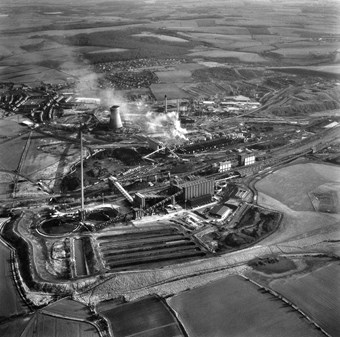 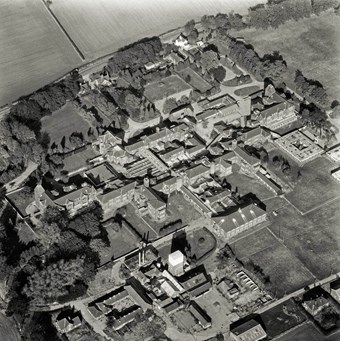 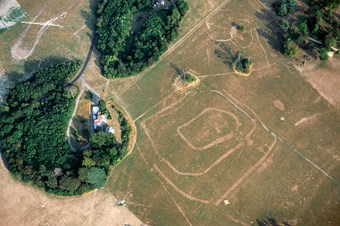 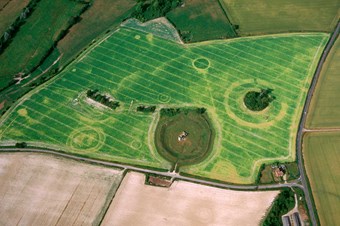 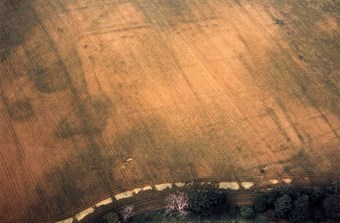 In this time the aerial archive has developed into the most important collection of aerial photographs of England, now holding over 6 million images. The collection can be used by anyone interested in seeing how an area has changed over the last 70 years and more. For amateurs and heritage professionals alike the collection is an important resource that helps us learn and understand England’s rich and complex heritage.

The images used on this page are copyright Historic England unless specified otherwise. For further details of any photographs or other images and for copies of these please contact the Historic England Archive.

This page was first published on 10 February 2018

Damian Grady is the Historic England Aerial Reconnaissance Manager. He joined the Royal Commission on the Historical Monuments of England in 1990 to map archaeology from aerial photographs and from 1998 became responsible for managing the aerial reconnaissance programme.