Skip to main content
Share this page
Share
A selection of spoons. Two are made of a copper alloy and the one in the centre is made of pewter. The copper alloy spoons have a round maker’s mark at the base of the spoon. © Historic England DP249647

The 'London' Wreck – Excavation and Analysis of Material at Risk

Work on the London wreck has revealed a wealth of information about this 17th-century warship.

History of the 'London'

The London played a significant role in British history. The ship formed part of a convoy sent in 1660 to collect Charles II from the Netherlands and restore him to the throne.

The London sank in March 1665, following a gun powder explosion.

The 'London' at risk

The London was rediscovered in 2005 during works in advance of the London Gateway Port development in Thurrock, Essex. In October 2008, it was designated under the Protection of Wrecks Act (1973) and immediately placed on Historic England’s Heritage at Risk register as its fragile archaeological remains were being exposed by shifting sediment levels on the seabed.

Work on the site is very challenging due to the low visibility, a highly tidal environment and its location right next to the very busy shipping lane!

Risk mitigation for the 'London'

From 2010 a group of local volunteers have started to monitor the wreck under the direction of site Licensee Steve Ellis with advice from a nominated archaeologist, currently Mark Beattie-Edwards of the Nautical Archaeology Society. This monitoring indicated that the seabed sediments were unstable and that artefacts were being lost. This led to a programme of finds recovery in 2012.

To mitigate this risk further, limited excavations (led by Cotswold Archaeology and funded by Historic England) took place from 2014–2016. This resulted in a well preserved and rich material archive, which has been subject to an extensive post-excavation analysis program.

A multidisciplinary project team has been researching and conserving the finds of the London: from minute fibre samples, leather shoes, glass bottles and navigational instruments, all artefacts were recorded and studied in detail. The results of this work will be published in a forthcoming monograph.

This work will inform our understanding of naval warfare and operations during the 17th century. But the results can also shed light on other aspects, such as trade and material culture.

Origin and use of raw material

The artefacts from the London present researchers with a closely dated assemblage: the date of sinking was recorded in Samuel Pepys diaries as 7 March 1665. In archaeology we hardly get more precise than that. For example, the results of the glass compositional analysis can tell us whether the glass was produced in England or on the European continent. Other assemblages can be used to refine existing typologies or give an insight into the use of raw materials such as wood or copper alloys and pewter.

But it’s not just the larger artefact groups that are interesting. Often it is the smallest and most unassuming remains that can tell us something.

Amongst the many leather artefacts were a number of leather book covers. But one book cover stood out: it had tiny remnants of what was believed to be gold leaf decoration. This was confirmed by material analysis using XRF (X-Ray fluorescence) – a non-invasive, surface analysis technique that tells us which elements are present. In this case the machine gave a strong signal for gold, but that was not all. On the inside of the leather book cover faint red paint was visible.

The presence of any remains of colour in a Northern European archaeological context is very unusual and normally only occurs under special preservation conditions, such as were present on the site of the London.

This area of red pigment was analysed using XRF and strongly elevated levels of mercury and lead were detected. This reveals that the pigment is vermilion, a mercury sulphide, which was probably mixed with red lead, as vermilion was very expensive. The presence of both gilding and red pigment, indicate that this book cover was a high status item.

Artefacts from the London have been on display at various temporary exhibitions: during the Festival of Humanities at the Institute for Historic Research and at Southend Museum, during a 10 months exhibition called “A sunken story”.

A small number of artefacts are on permanent display in the new Stuart and Tudor Galleries in the National Maritime Museum, Greenwich. To find out more about this co-curated exhibition and how the artefacts were selected, read this blog. 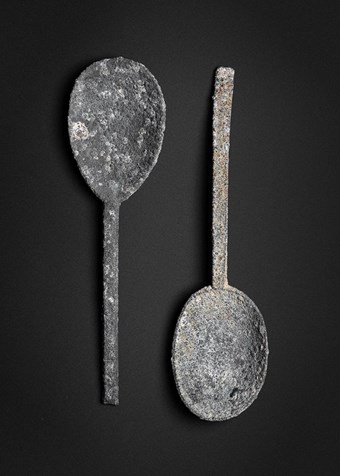 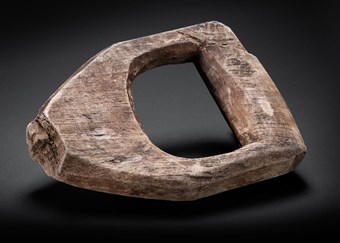 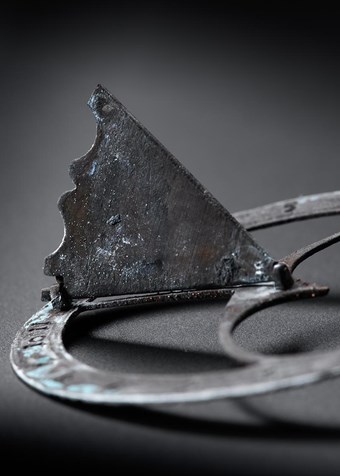 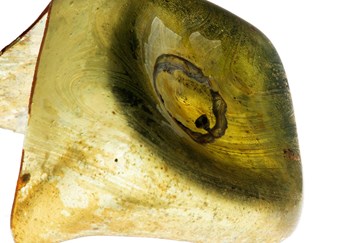 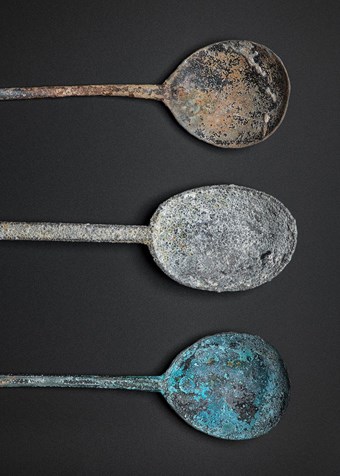 You can explore the London wreck site from the comfort of your sofa or on the go, by exploring the dive trail.

Race Against Time to Raise Gun Carriage from the London Wreck
Excavating the London Shipwreck – Divers, Local Volunteers and 17th Century Finds Come Together on Southend Pier
17th century Shipwreck off Southend Pier to Give Up Its Secrets