Spending a Penny: an Exploration of England's Public Toilets

In 1851 the Great Exhibition took place in Hyde Park, London. The refreshment rooms featured public conveniences for which a small charge was made. By the time the exhibition closed over 800,000 visitors had paid more than £2,000 for use of the facilities. And so was born the concept of ‘spending a penny’ to use the loo.

In this exploration of our sanitary heritage we’ll pay a visit to municipal WC’s as well as shared facilities within private spaces.

For centuries the streets of England’s towns and cities had been fouled by human waste. In 1858 George Jennings who had supplied the ‘sanitary appliances’ to the Great Exhibition, wrote to the Commissioners of Sewers offering to set up public toilets in the City of London. His letter gives some impression of the state of the city’s streets at the time:

I think it only right to call attention to the efforts I have made to prevent the defilement of our thoroughfares and to remove those Plague spots that are offensive to the eye, and a reproach to the Metropolis.

By the late Victorian era many local authorities were providing public conveniences. It was routine to find toilets in workplaces, railway stations, parks, shops, pubs, restaurants and an array of other places.

Many public lavatories were built beneath urban streets or public buildings, an idea proposed by George Jennings in 1858. These subterranean lavatories took up minimal space on busy streets and station concourses. They also helped to hide 'objectionable contrivances' from the view of sensitive Victorians.

The appearance of public toilets undoubtedly helped to improve the cleanliness of our towns and cities. However a large proportion of the population failed to benefit from their proliferation.

The urinary leash – an inconvenient truth?

The vast majority of the early facilities only served men. One explanation may be that Victorian society believed ‘modest’ women would not wish to be seen entering a public convenience.

The lack of provision for women meant that they were often forced to stay close to home. This restriction is known as the 'urinary leash'. Today some consider it to be a deliberate means of controlling women’s movements and ambitions outside of the home.

The dearth of public toilets not only limited leisure activities but also the jobs available to women. A workplace which only had facilities for men was under no obligation to provide toilets for female employees. Moreover, a company could use the lack of such facilities as an excuse for not hiring women.

At the gentlemen’s convenience 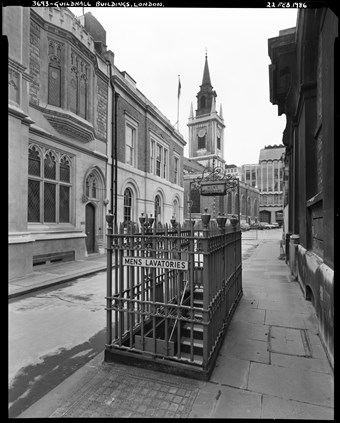 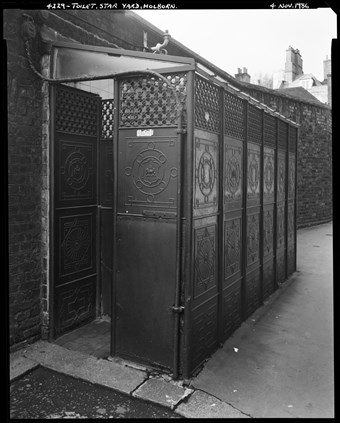 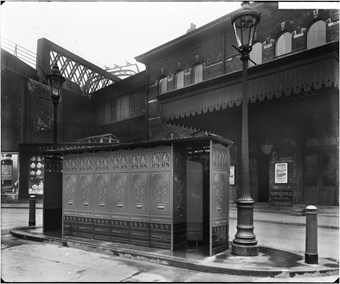 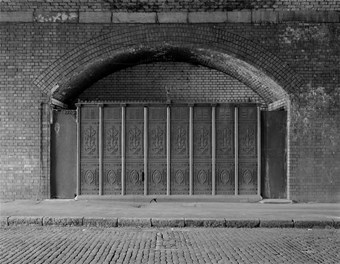 Out of the closet – ‘ladies’ go public

Finally, thanks to campaigning and the power of commerce the provision of public lavatories began to reflect the changing roles of women in society.

In 1889 a grand municipal women’s convenience opened at Piccadilly Circus, in the heart of London's West End shopping district. The area's fashionable department stores attracted prosperous middle class women. The authorities and local businesses knew that it made financial sense to keep female shoppers there as long as possible. The longer they stayed the more money they spent…

In 1899, the Bank Hill Ladies public conveniences opened near the pedestrian walkway along the ramparts of Berwick-upon-Tweed. The charge for entry was one penny and by the end of the first day, the attendant Mrs Jamieson had taken 5s and 2d meaning that 62 people had ‘spent a penny’.

Public loos on Seaburn seafront in Sunderland opened around 1904. Catering for both men and women these underground toilets eventually closed in the 1960s but were restored and reopened in 2018 and have since been listed at Grade II.

Bit by bit the provision of facilities for women improved. Ladies rooms began to appear in shops, theatres, railway stations and many other places.

On Monday 15 March 1926 Hull City Council posted a notice in the local press inviting builders to tender for a new public convenience adjacent to Victoria Pier in Nelson Street. The new loos served both sexes, replacing an earlier ‘men only’ cast-iron urinal.

In 2017 Historic England bestowed a Grade II listing on the toilets. This accolade was in recognition of their architectural merit and their role in illustrating the changing social status of women during the 1920s. Another of Hull’s listed loos is in the Market Place. Dating from about 1900 it was built strictly for men.

From desirable to dilapidated, modern to outmoded – a compendium of conveniences 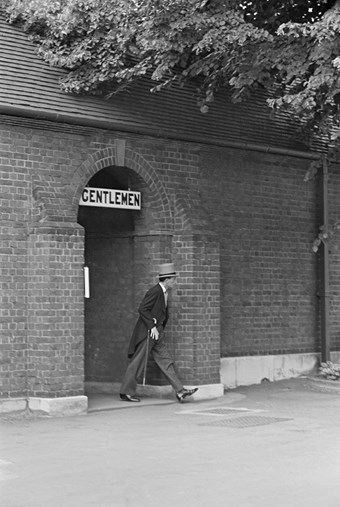 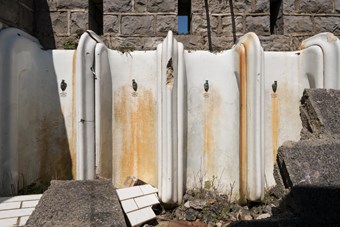 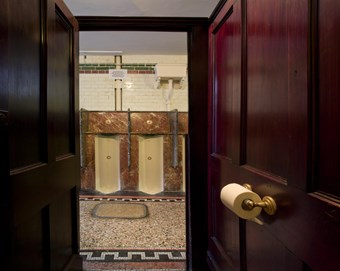 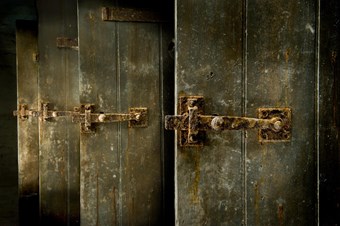 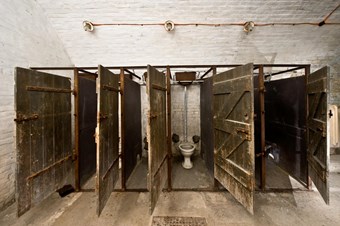 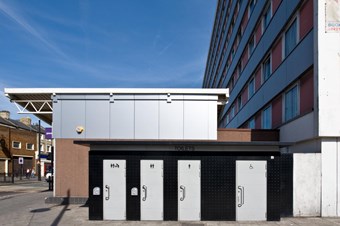 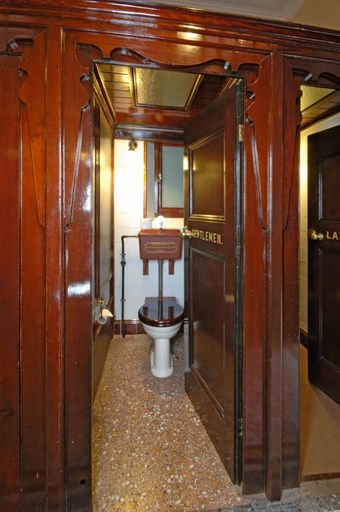 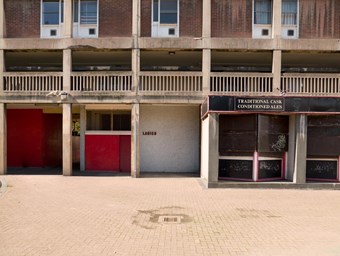 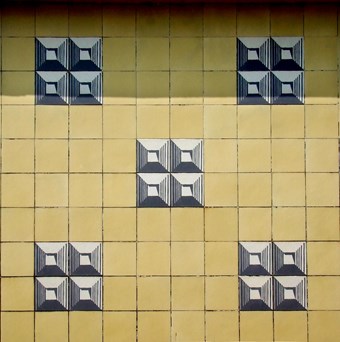 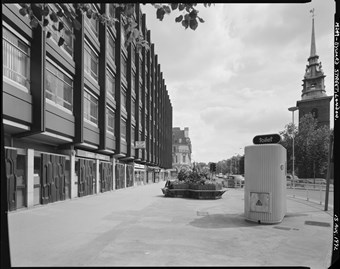 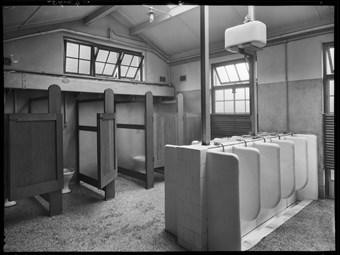 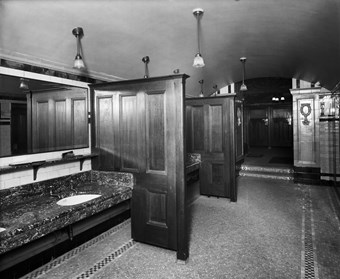 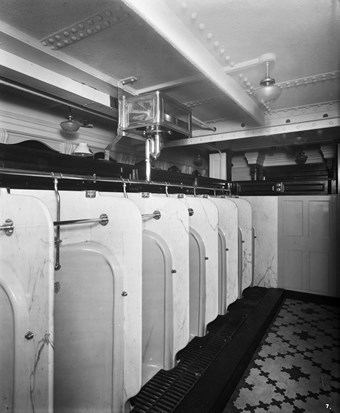 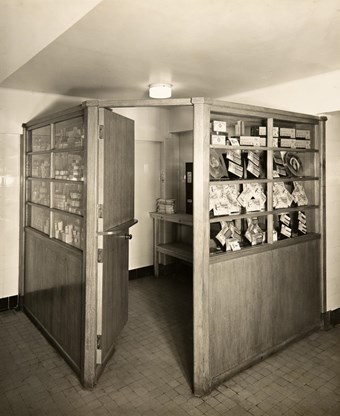 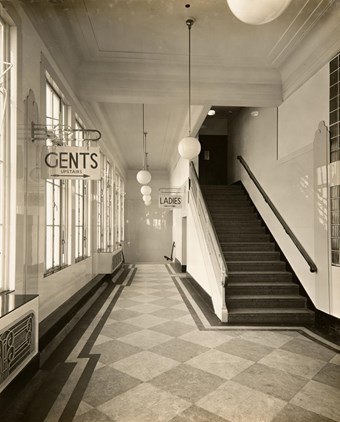 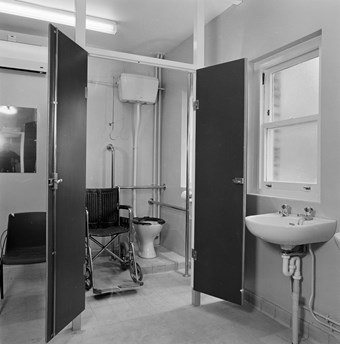 Caught short – the ever decreasing availability of the public toilet

Anyone caught short of late will know that public lavatories are no longer as convenient as they once were. Many have gone altogether, whilst others are frustratingly padlocked awaiting sale or demolition by local authorities. Some have been ingeniously repurposed – converted into flats, bars, restaurants, coffee shops, clubs, art galleries and even beauty salons.

When photographed in 1991, this Forest Hill lavatory (above) was already closed to the public. The entrance is gated and padlocked, the windows broken. It was later converted to residential accommodation and now forms part of the property at 17 Devonshire Road.

This photograph shows the Tootal Broadhurst and Lee warehouse in Manchester, with public conveniences to the right of the image on Great Bridgewater Street. After closure the loos were converted into a bar, appropriately called ‘Temple of Convenience’. The Elbow song ‘Grounds for Divorce’ refers to the bar in the line:

There’s a hole in my neighbourhood down which of late I cannot help but fall.

'Grounds for Divorce' by Elbow

In May 2019 The Royal Society for Public Health published a study into the decline of the public toilet. The report, titled ‘Taking the P***’, reveals that since 2010, 700 council run public toilets have closed.

It emphasizes how the reduction of public conveniences hits the homeless, disabled, outdoor workers, those with illnesses requiring frequent toilet use and women the hardest.

According to the report the ‘urinary leash’ is once again becoming an issue with one in five people stating that a lack of facilities nearby can restrict outings from their homes.

Many of the issues highlighted by The Royal Society for Public Health echo those raised during the Victorian era. The debate over our public toilets has seemingly gone full circle.