Mysterious Neolithic ceremonial monuments, Iron Age settlements, square barrows and a Roman farm have been newly discovered by Historic England’s flying archaeologists who have been surveying the parched landscape from the skies during this spell of prolonged dry weather.

This summer’s heatwave is particularly good for aerial archaeologists as cropmarks form faster and are more obvious when the soil is very dry. Over the past few months, Historic England’s archaeologists in the skies have been looking for patterns in crops and grass that reveal thousands of years of buried English history.

Historic England uses aerial photography of cropmarks to produce archaeological maps which help to determine the significance of buried remains. This can help when making decisions about protecting them from future development or damage caused by ploughing.

Duncan Wilson, Chief Executive of Historic England said: “This spell of very hot weather has provided the perfect conditions for our aerial archaeologists to ‘see beneath the soil’ as cropmarks are much better defined when the soil has less moisture. The discovery of ancient farms, settlements and Neolithic cursus monuments is exciting. The exceptional weather has opened up whole areas at once rather than just one or two fields and it has been fascinating to see so many traces of our past graphically revealed.”

Helen Winton, Historic England Aerial Investigation and Mapping Manager said: “This is the first potential bumper year in what feels like a long time. It is very exciting to have hot weather for this long. 2011 was the last time we had an exceptional year when we discovered over 1,500 sites, with most on the claylands of eastern England."

Damian Grady, Historic England Aerial Reconnaissance Manager said: “This has been one of my busiest summers in 20 years of flying and it is has been very rewarding making discoveries in areas that do not normally reveal cropmarks.”

These long rectangles are believed to be Neolithic cursus monuments, one of the oldest monument types in the country, usually dating from between 3600 and 3000 BC. The rectangular feature on the left was recently mapped as part of a project funded by Historic England to record all archaeology from aerial photographs and airborne laser scanning (lidar) in North Bedfordshire. Until this year, the enclosure on the right has lain hidden beneath a medieval bank known as a headland, that is being gradually ploughed away.

Cursus monuments range in length from around 100 metres to nearly 10 kilometres in the case of the Dorset Cursus. Their exact function is still a mystery but they are generally thought of as enclosed paths or processional ways, while they may also have served to demarcate or even act as a barrier between different landscape zones. Most of the 100 plus cursus monuments known in England were discovered through aerial survey.

Image gallery of a timeline showing how archaeology can make cropmarks 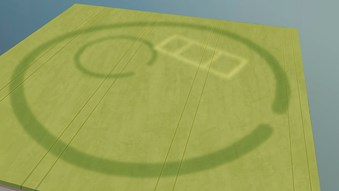 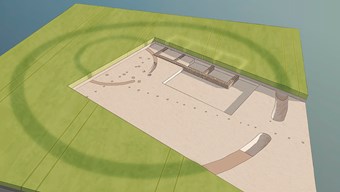 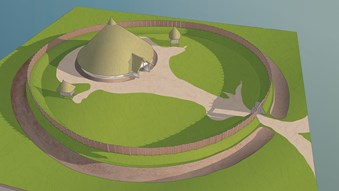 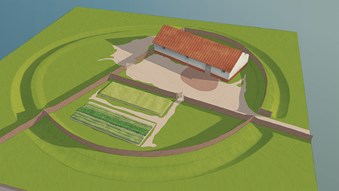 Rounds were widespread in Cornwall in the Iron Age. These settlements consist of a circular bank and outer ditch with a single entrance and usually contained round houses positioned close to the edge of the outer ditch. In this case, the outer ditch only can be seen. In addition to the round, there is a rectangular enclosure and a double-ditched enclosure. At this stage, it is not clear if there is any association between the enclosures and the round. To the left of the round is a small circular ditched feature that is likely to be the remains of a Bronze Age barrow. This variety of sites within one field not only provides valuable new information about the range and distribution of prehistoric settlements in Cornwall, it also gives a more local picture of the continuity of settlements over at least 4,000 years within the parish of St Ive.

This is one of dozens of new discoveries in Cornwall. Its layout is unusual with concentric ditches with entrances connected by two parallel ditches. It is thought the inner ditch surrounded a settlement from the Bronze Age or Iron Age and the outer ditch may be later in date and used as part of a system to manage livestock.

The cropmarks of four squares indicate the distinctive remains of Iron Age burial sites on the Yorkshire Wolds. These cropmarks represent the ditch surrounding a burial mound. Although relatively rare nationally, these square barrows are common on the Yorkshire Wolds and are sometimes associated with elaborate burials with exotic grave goods such as chariots. These new discoveries demonstrate that even in well-explored areas such as the Wolds, there is still the potential for new revelations if conditions are right.

The unusual triple-ditched circular enclosure indicates the remains of a complicated structure of a Bronze Age burial mound or barrow. The stripes running top left to bottom right of the same field are caused by the buried remains of ridge and furrow that formed during medieval cultivation of the area, perhaps levelling the mound over the barrow. Above the barrow there is a thin ditch and a series of pits. This alignment of pits is typical of boundaries found in the Midlands and are usually thought to be land boundaries from the Iron Age. Some of the other patterns in the crop reflect the underlying geological features such as dried-up streams and alluvium deposits. 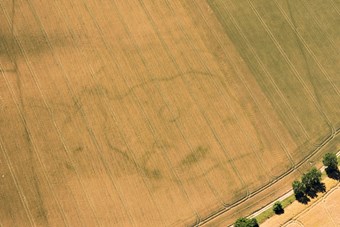 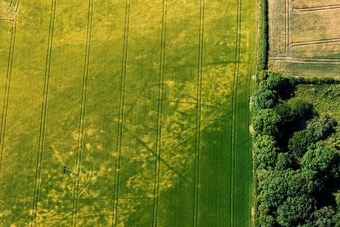 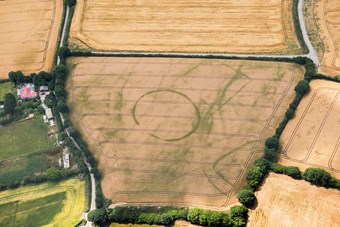 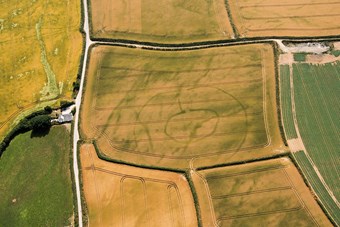 This prehistoric settlement or cemetery has been discovered in the form of an irregular-shaped enclosure with a funnel entrance. In the interior, there are faint traces of two circular features which could be the gully ditches surrounding Iron Age round houses or ditches around a Bronze Age burial mound.

Cropmarks in a field of grass cut for silage have been revealed showing different phases of activity. The central enclosure may have contained farm buildings, and then more fields and paddocks were attached to the central area. This form of settlement probably dates to the Roman period.

These new discoveries are typical examples of Bronze Age and Iron Age farms found in this part of Somerset. There are four sites, which probably represent different farms in use at certain times over a period of hundreds or thousands of years. In the centre, there is an oval feature, which at some point later was abandoned and a rectangular settlement enclosure built on top.

A large, likely prehistoric enclosure has been discovered on the Blackdown Hills defined by a thin ditch with an entrance. This site will require further survey and research to provide more understanding of its importance in this part of Somerset.

More detail can be seen of the lost Elizabethan buildings and gardens associated with Tixall Hall, which is a site that was already known. The Hall’s Grade I listed gatehouse built in 1557 still stands, however lighter lines can now be seen in the ground which reveal the buried foundations of Tixall Hall which was built in 1555. Among them are also the foundations of a new hall that was begun during the First World War, but demolished in 1926.

Features such as a circle of pits that have not been visible for years can be seen. The cropmarks reveal buried remains of later Prehistoric (circa 4000BC -700BC) funerary monuments, together with a settlement. This site was already known and is protected as a scheduled monument. 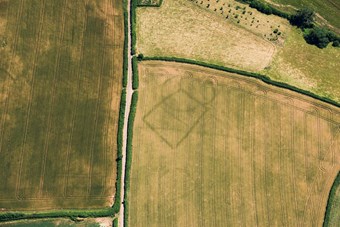 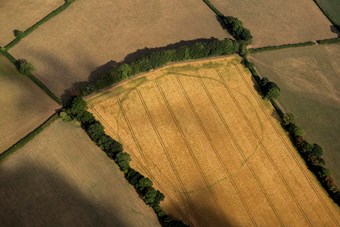 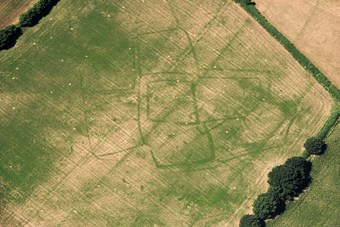 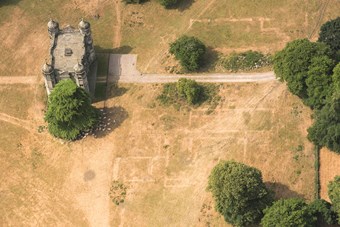